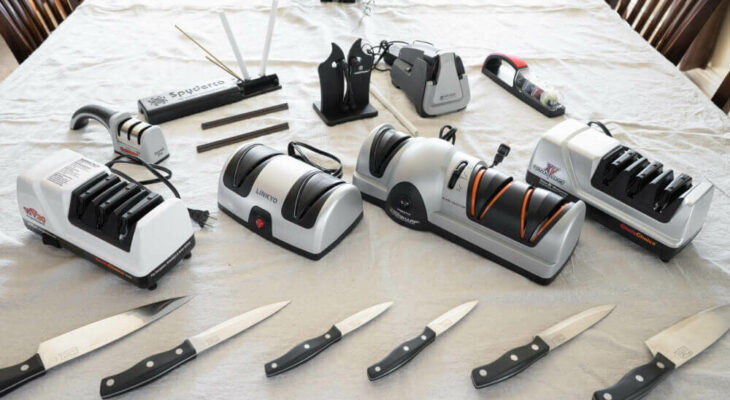 Have you ever seen chefs or culinary experts on the television, and the precision with which they slice through potatoes or chop onions? Seeing them do it is at all times, oddly satisfying. This is the first and foremost reason why they would always want to keep their knives sharp. Not only chefs, but military persons, survival enthusiasts, or simply home makers always require knife sharpeners while putting their everyday-carry (EDC) knives, machetes or survival knives to use for a range of tasks like slicing, cutting, chopping or skinning.

Most of the good quality knives come sharp right out of the box, but over time they literally lose their shine and it becomes quite difficult to work with their blunt edges.

Knife sharpeners have always been with the human race since time immemorial but over all these years, with the technological advancements, they have become certainly a lot more than just stones to sharp the blade-edge. In the olden times, knife sharpeners would roam around in the streets on a bicycle and would go door to door to sharp knives, but in our era, this practice has become more or less obsolete. With the advent of technology, knife sharpeners of the present times have come a long way to become easy to use, high-tech and highly efficient. Now you do not have to wait for the cycle man to sharpen your knives for you. You just have to choose the right sharpener that suits your demands.

This is a comprehensive guide that will let you choose the best knife sharpener for your demands, amongst the various categories of knife sharpeners, based upon specifications, technology and price.

Why Our Knives Need Sharpening?

We live in a world where nothing is ideal, not even the air we breathe. Everything loses its charm, once it is put to use. You could purchase a sharp-out of the box knife, which might be a regular knife or a machete or a survival knife. A knife’s biggest selling point would surely be its ability to be put to multiple uses, and surely you would keep this in mind while buying any knife. Now, the problem arises when knives lose their sharpness for the very purpose they are bought, i.e. multiple utility. In the realm of multiple utility, there are many a task that are not meant to be performed by knives such as slicing heavy items, using the knife as a substitute to axe, or using it for piercing through thick tin cans. All this heavy-duty work contributes in the wear and tear of knife edges. So, it is quite a necessary to keep a knife sharpener along with a good knife so as to use the knife for a long time and up to its maximum potential.

Any ardent fan of gastronomy would know that the food we eat is influenced by the way it has been cut. Different types of culinary cuttings impact the shape, texture, taste and size of the food we eat. In order to maintain the necessary sharpness of the knife to get the desired taste, shape and texture, it is necessary to sharpen the culinary knives time to time so that they don’t wear off.

When you buy a knife, claiming to be a survival or culinary enthusiast, or simple an adventure freak, you have to make sure to put in all the necessary efforts to make sure the knife sustains to all the heavy duty work it has been assigned. For this purpose, you are always going to need a knife sharpener.

How To Sharpen Your Knife?

Here comes the artful part. Sharpening of knives is an art in its own right. Two kinds of sharpeners are incorporated by the owners of knives. Manual sharpeners do not particularly yield great results unless they are used in a correct manner.

The overall sharpening of knives might be put into three categories. The first one of them being the sharpening itself. For sharpening, you might need to further classify the process into two categories-Rough and fine sharpening. For rough sharpening, you can use either oil stones, water stones or medium grits of sandpaper. The same tools, though with finer grits might be used for finer sharpening. The process of sharpening is done to unravel the metal particles off the blade, and sharpening at an angle of 20 degrees will yield the best results as different angles will have different results on the blade.

The next stage would be the process of honing or straightening. The process involves straightening the existing metal on the steel blade of knife, without remove excessive quantities of metal. The main motive of this process is to make the blades realign in a desired manner. All you need to do is to put the heel of your knife on the straightening steel and rub it with optimum pressure while aligning it to 20 degrees. After one side is straightened, repeat the same steps on the flip side of the blade too.

The final step would be to arrive to the stage where the process of polishing or stropping happens. This process gives the knife its final touch. It helps in providing further precision to the sharpness of the knife blades and it also provides a mirror-like finish to the knife blade.

The process is done by polishing the blade of the knife on a rotating cloth wheel, which helps the blade to preserve its sharpness and shine for a long time.

How to Choose the Best Knife Sharpener

The five various types of knife sharpeners all differ greatly. A hone fits in your knife drawer, however a whetstone or sharpening stone may require a tabletop setup, similar to a knife sharpening system.

To create, sharpen, and hon an edge on a blade, many electric sharpeners use a two- or three-step method. Sharpening dull blades with a coarse grit is the first phase, and honing sharp blades with a fine grit is the final step. When a sharpener is turned on, it spins the sharpening stones, which sharpen blades to the proper sharpness when a knife is drawn through the slots. Since most electric sharpeners come equipped with guides that make it easy for the user to achieve the ideal angle when sharpening knives, they are popular.

Moreover, if your budget doesn’t allow you to spend a lot of money on high-end knives but you want a sharp blade when you need it and you don’t want to learn how to operate a manual knife sharpener, an electric one may be the right choice for you.re

You’ll have better control with a manual than you would with an electric and a better edge with a manual. Because of the angle guides, the operation is kept simple and straightforward.

To be clear, all sharpening stones can be called “whetstones,” however not all whetstones are wet stones. Confused? “Whet” implies to make anything more sharpener. If you say it aloud, it’s likely to confuse people, especially if you’re using a wet whetstone. Others are used dry, while others require the use of oil. In terms of functionality, every one of them follows the same standard procedure.

This product is known by many other names, including sharpening steel, honing steel, knife hone, honer, and so on.

Though sharpening steel is the most popular name given to them, this is incorrect. Because it does not sharpen a blade, don’t expect to be able to restore a badly worn or damaged knife with a few strokes down the hone’s length.

To hone a knife is to straighten out the blade’s primary edge after it has been twisted out of alignment. When used frequently, a sharpened edge will get distorted and lose its sharpness. It’s true that honing doesn’t make the edge any sharper, but because it restores the edge to its original straight and true state, it appears sharper when cutting.

A knife sharpening system, which is also popular among chefs and serious knife collectors, combines the fine control of a whetstone or sharpening stone with an easy-to-use electric sharpener. Clamps keep the knife in place while the user moves a sharpening stone over the blade’s edge.

The whetstone/sharpening stone that is attached to the device works in conjunction with the device’s angled arm. Adjustable-angle arms allow you to use this device with a knife at whatever angle you like. Depending on the device, you may be able to sharpen both blade faces at the same time, or just one. Damaged or dull blades can be restored using the various grits that are available.

We have come a long way from being inarticulate homo-sapiens to being a superior race living in the age of modern technology. What we have managed to carry along all this time is our reliance on sharp tools to cut, pierce or split things. Knife sharpening measures have evolved radically over the past few years and with the advent of modern technology, we have plenty of choices to sharpen our tools.

What has to be kept in mind while working with a knife is that it is going to require some straightening or re-aligning eventually. You have to decide upon the knife sharpener you would want to keep according to your knife type, your purpose, and the amount of time and skills you would want to put in while sharpening your knives.

Time is money in this age of globalization, so electric knife sharpeners are there in the market to do most of the tricky work for you. If you want your knives to be traditionally sharpened, you should go for the manual variants. People who have knife usage restricted into their kitchen, garage or gardens should ideally go for the sharpening rods that re-align their blade edge.

Whatever option you might want to explore, keep in mind that it is your time and efforts that matter the most and the machine you would want to keep with you should reduce your time and efforts that you put into knife sharpening. Your choice of sharpener should be easy to carry, use and should not burn a hole into your pockets. All the best choosing the best knife sharpener to carter your needs. 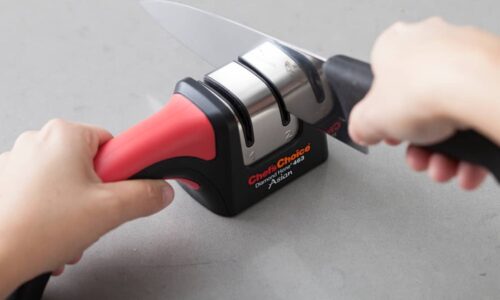 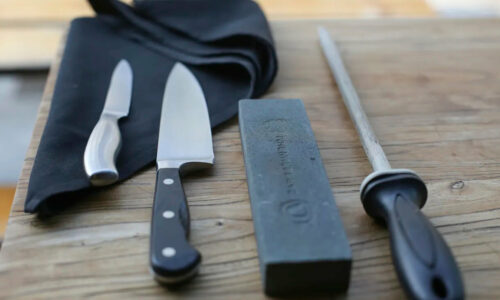 Sharpening stones are ideal tools when you require honing or grinding the edges of your knives, scissors, or …